In 2010 we announced the Reference Anniversary preamplifier, a special limited edition product commemorating our 40th anniversary. It was acclaimed by many as the finest preamplifier available and a fitting tribute to all of the classic Audio Research products that were introduced during the forty years that preceded it. That we would only accept new orders for this special product during the anniversary year surprised almost everyone, but we considered the limited time frame appropriate. Since that time, we have learned a few things, and the result of that knowledge led to the development of the Reference 10. Included are critically chosen new components, proprietary custom-made capacitors, wiring, and new connectors that cumulatively provide a level of performance never before achieved. Key Audio Research design traits remain: The signal path is fully discrete, all-tube, pure Class-A, with zero feedback. Other attributes and choices remain, too: Each unit is completely hand-soldered and hand-constructed in our Minnesota facility using the finest materials, with major components such as custom transformers, plated-through circuit boards, and casework sourced locally. All engineering is performed in-house.
The Reference 10 follows a new aesthetic path as well. It has a very modern and elegant finish that will attract new admirers without alienating fans of our older products. The front panel of the main control unit has a new, large round volume knob on the right side, with two buttons under it for Power and Mute—the only two buttons on the unit—and a large display on the left. Our logo is above the knob on the right, making this the first asymmetrical Audio Research preamplifier ever. The left side of the front panel contains an interactive touch-screen display that allows the user to intuitively control almost all functions. 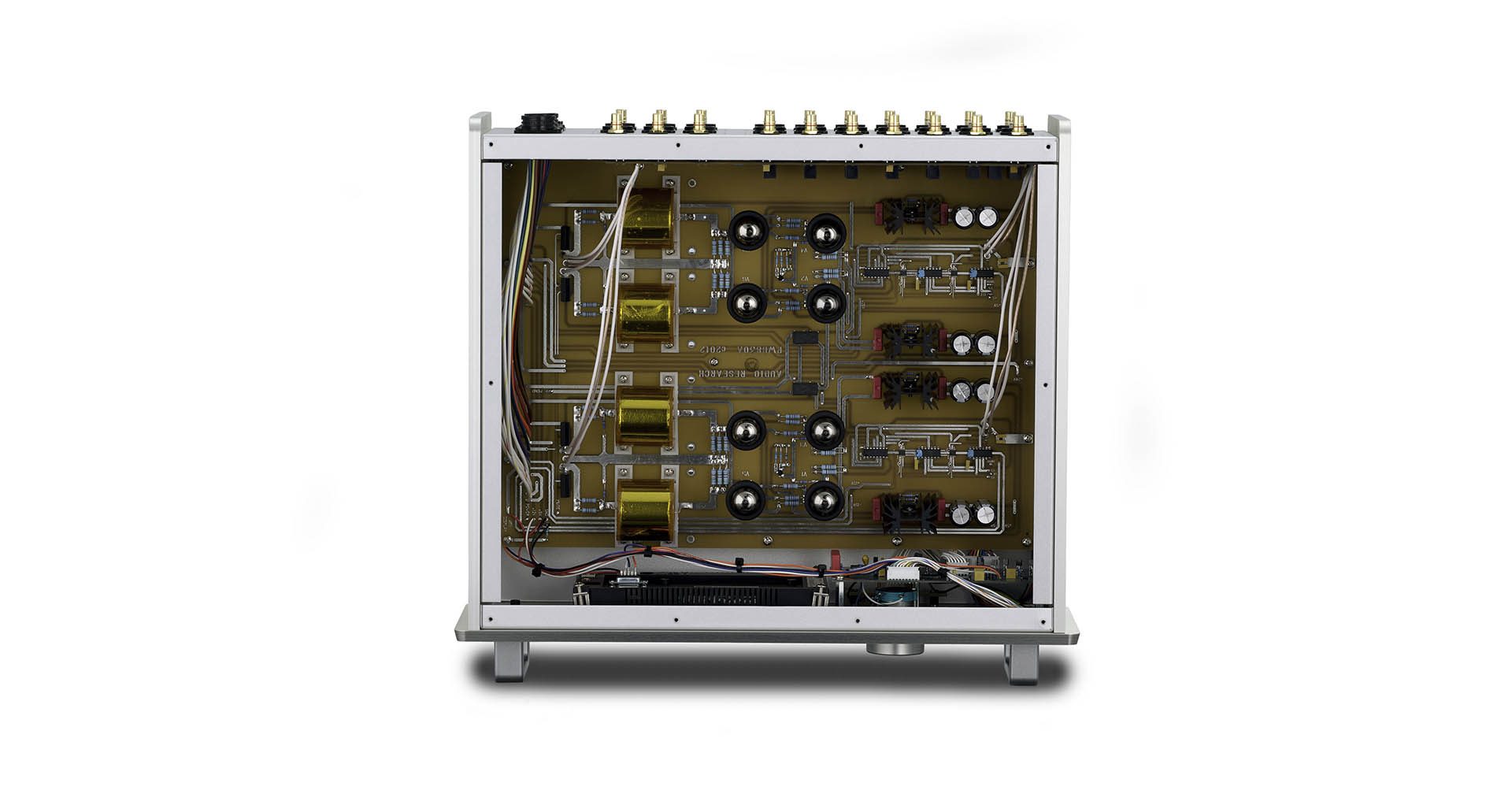 The power supply chassis, connected to the main unit via two umbilical cords, simply has one green LED under its offset Audio Research logo. All of the side panels are finished identically to the front panels: Natural anodized, one quarter-inch thick, with no screws visible. The entire chassis (including rear panel) is painted silver to complete the look. There are beautiful new, clear acrylic covers with a revised perforation pattern. And, there is no printing on the front panel of either chassis.

After the single 20A power cord, the Reference 10 is completely dual-mono from the power supply through the audio circuit. There are dual, separate low- and high-voltage transformers for each channel; there is dual-mono vacuum-tube regulation (one 6H30 and one 6550WE per channel), dual-mono audio circuits (four 6H30 per channel), and enough energy storage for a serious power amplifier.

Just as the Reference Anniversary was shockingly better than its predecessors, the Reference 10 offers a further level of resolution, refinement and dynamism that vividly improve the musical experience in every way. As we have said before, words can only fall short of your own experience; to understand how much more profound listening to your favorite recordings can be, you must hear the Reference 10. It is stunning. 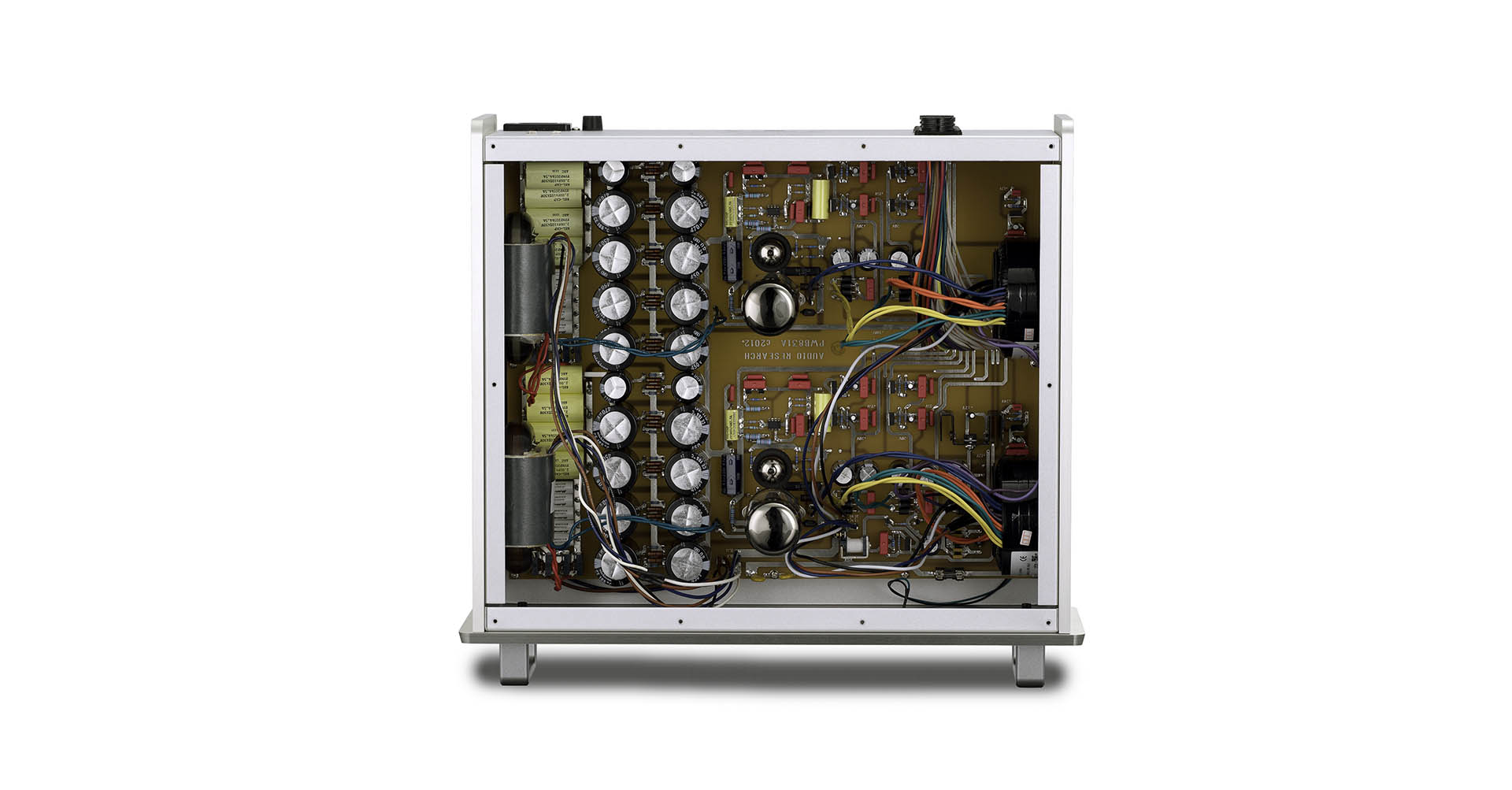 This isn’t just about hearing more from your recordings, although that is what first attracts you to the Reference 10’s performance. It’s like a reset button on your music. Tracks you know so well aren’t just replayed as if it were the first time you heard them; they are rebuilt note-by-note in front of you, opening up that music in ways you can’t anticipate until you experience them. Yes this is about detail, space, and dynamic range – Bernard Purdie’s drum pedal on ‘Memphis Soul Stew’ [KIng Curtis Live at Filmore West, ATCO] has a squeak that really high-resolution systems can resolve. Many of those are brutally analytical rendering the track hard to hear because of that ever-present squeak, but the Reference 10 forces you beyond that, to a point where it is just a part of the musical whole again. It’s just this time, there are so many more parts to that whole. Let’s put it this way; anyone who was actually at that concert almost 50 years ago might have heard that squeaky drum pedal, and I guarantee not one person walked out of the concert because of that squeak. That’s how the Reference 10 pushes ahead of the competition. That’s not to say the preamplifier is forgiving, but instead is so informative that detail alone isn’t enough; it’s like you get a new set of ears  with the Reference 10 and they take everything in! Going back to more real world preamps is an exercise in disappointment.

What you learn from the Audio Research Reference 10 preamp is just how deep ‘good enough’ goes, and just how much more you can get from a system if you set ‘good enough’ aside. What you also learn from the preamplifier is that is as much about the listener as it is the system, or even the music played on that system. Many will be content with simply having a system that sounds excellent, but if even that degree of insight is not enough and if you are up for the challenge laid down by the Reference 10 preamplifier, the rewards are remarkable.